The Cards Against Humanity Expansion Cards You Need Right Now

Do you remember a world before Cards Against Humanity? Such a world must have been a darker, far less entertaining place. Cards Against Humanity revolutionized adult gatherings forever with its hilarious and at times disturbing brand of humor. Apples to Apples thought they had it figured out when they invented the concept of a card game that pitted people against each other to come up with the funniest phrase – but Cards Against Humanity took it to the next level by making those phrases dirty, raunchy, gross, or just plain messed up! If you have ever really wanted to get to know your friends (or even your family members) and the dark places their minds can go, there is no better way to figure someone out than to play them in Cards Against Humanity. Talk about a game that’s better with a beer in hand.

Check all the Cards Against Humanity expansion packs you could ever want:

Regardless of your political affiliation, you have got to admit: the current United States President has some quotes that are just Cards Against Humanity gold. Quote some tweets, reference some rallies, and get ready to have a tremendous time with this expansion pack. 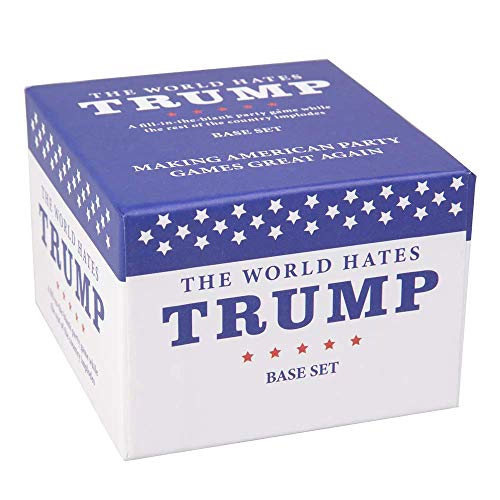 The Green Box is a set of entirely new expansion cards (some of the other packs on this list have been realized in earlier expansion pack versions). 300 totally new cards to get the game started!

The most special aspect of the Fifth Expansion is that not only does it come with 100 completely new cards, it also comes with twelve bonus blank cards so you can craft your own dirty phrases. How filthy is your own mind?

The Red Box combines the first, second, and third expansion packs all into one convenient box of 300 cards to shake up your Cards Against Humanity game. Great for a first time expansion pack purchaser.

If you are convinced the best years of humanity were the same years dominated by the Backstreet Boys and frosted tips, this expansion pack is for you. It features 23 white cards and 7 black cards that are all desperately nostalgic for the simpler times of the 1990’s.

Let’s say you are really, really serious about your Cards Against Humanity. No respectable CAH master would ever be seen without this box, which can store up to 2500 cards and comes with 50 blank cards for your own perverse ideas. The box even comes with a fun surprise included – and we can only imagine what the Cards Against Humanity people define as a “fun surprise.”

The Best Party Games for the Drunk and Stoned

The Most Legit Replica Superhero Weapons For Your Collection

Related Articles
We will be happy to hear your thoughts