He-Man and Masters of the Universe Nostalgia Overload

It seems almost an impossible long-shot that this one 1980s cartoon franchise should have enduring popularity today. The original He-Man and the Masters of the Universe launched in 1983 as one of the fabled “Saturday morning toy commercials,” created indeed by Mattel not as a fictional world first, but as a line of action figures which are then mythologized in a fictional universe – similar to the Transformers, My Little Pony, and other kid-aimed franchises of the 1980s.

Like all 1980s franchises, MOTU was born on the back of Generation X, which together with several film and comic adaptations kept the popularity alive until the Internet took off. Those early days of the Internet carried several MOTU memes, including a video mash-up of He-Man and friends with the song “What’s Going On?” by Four Non-Blondes, one of the earliest viral videos. By the time that had circulated, Millennials appeared to collect the torch and carry the franchise to the present day.

MOTU was always a charmingly cheesy action romper of the “low fantasy” genre, typical of Conan the Barbarian and other “sword-and-sandal” epics. For the record, the rumor about Mattel being contracted to create Conan figures but getting cold feet due to Conan’s kid-unfriendly violence levels is false. And there was an issue raised about franchise copyright, but a judge ruled that officially, Conan and He-Man were representatives of a much larger genre and not necessarily copied from each other.

Counting up MOTU, He-Man, and She-Ra, there’s been six films so far, including the latest She-Ra and the Princesses of Power which just released in 2018. D.C. Comics published a crossover of He-Man and the Thundercats, which you can add to the pile of comic titles published around MOTU including a daily newspaper comic strip that ran through the second half of the ’80s. Yes, He-Man was once a funny paper panel right between Garfield and Bloom County!

Numerous animated series runs are also part of the legacy, including He-Man & She-Ra: A Christmas Special in 1985. There are also numerous video game titles, released for PC and even oddball platforms like the Game Boy Advance (He-Man: Power of Grayskull, 2002), and one tabletop role-playing game: FASA – The Masters of the Universe Role Playing Game.

As you might guess by now, we have a lot of ground to cover with this list. Join us for a nostalgic look back over four decades of holding off Skeletor, and see how this franchise has grown. You too may well be asking “What’s going on?” 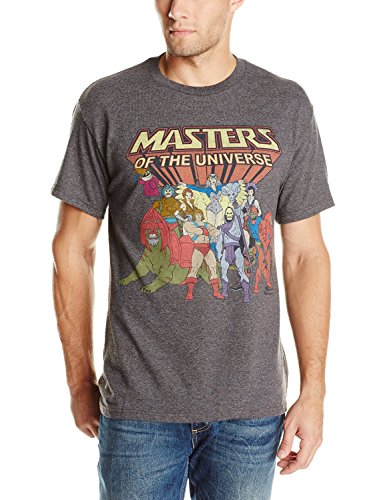 Well, we might as well keep it simple to start off. Here is the T-shirt you should have had in the 1980s, with the cast rounded up for the classic Filmation run of the original series. Don’t attend a comic-con without it! 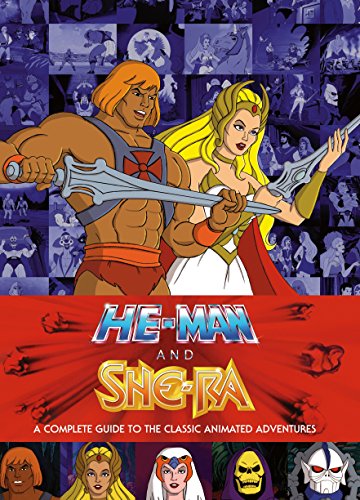 He-Man and She-Ra: A Complete Guide to the Classic Animated Adventures

You think you know MOTU, but you don’t know it nearly as well as you will when you get this hardcover 592-page complete guide to the classic animated series. Dark Horse Books put this together to cover story synopsis, behind-the-scenes production, and loads of trivia for every single episode of He-Man and the Masters of the Universe and She-Ra: Princess of Power. There’s NASA projects that this well documented. 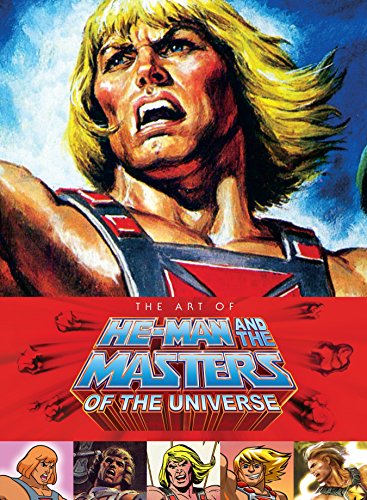 Art of He Man and the Masters of the Universe

And in case that last book wasn’t enough, this one is a coffee-table art book with 320 pages of MOTU nostalgia. We’re just getting started. 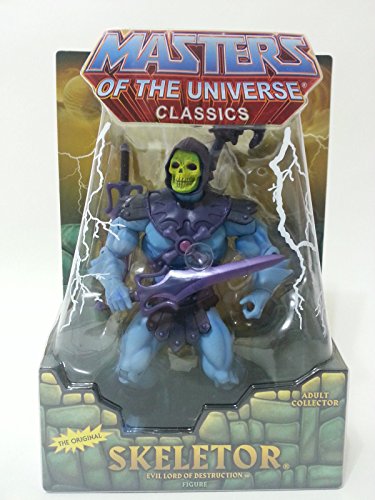 Skeletor. One of the most iconic villains from any franchise ever, with a name nearly synonymous with evil and the greedy desire for power. Comes as a classic-style poseable action figure with armor and swords. Give him plenty of love, he looks like he could use it. 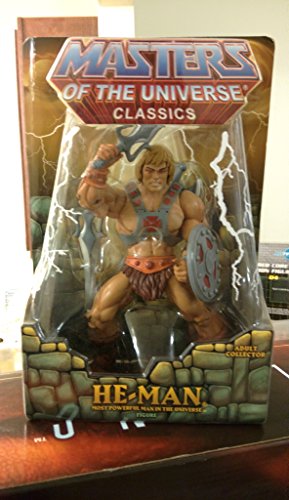 The companion champion to our last pick, this is the equally elaborate classic design of He-Man, as a poseable action figure with armor, shield, and sword. Yeah, he’s hefting his axe on the back-strap too. Just the packaging alone makes this an impressive collector’s item. 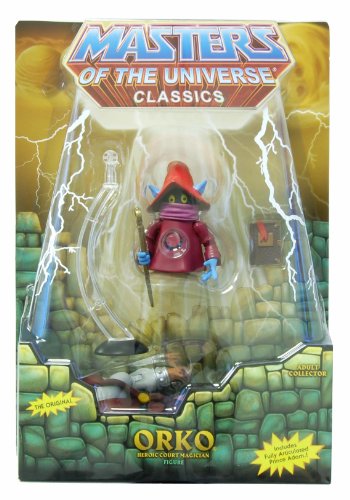 Yep, original Orko! Not that weird Gwildor character they introduced to replace Orko in the 1987 live-action movie, but the classic levitating little wizard dude and comic-relief foil. Some fans out there seem to love Orko the most out of the whole series. Comes with his familiar outfit and staff. 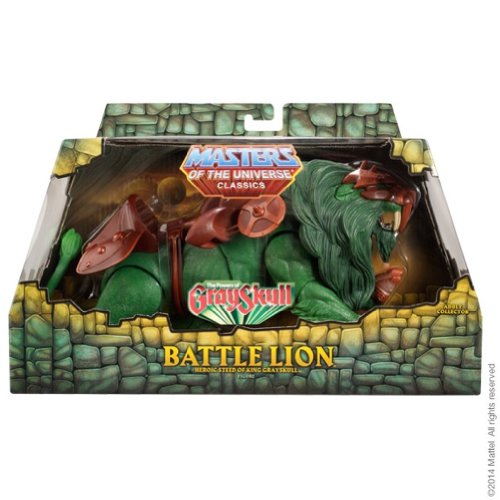 Granger is the green battle lion mount of King Greyskull, first sold as a toy in 2014. This guy’s a pretty impressive rendering with his battle armor. It’s one of those figures you can’t confuse with any other franchise. 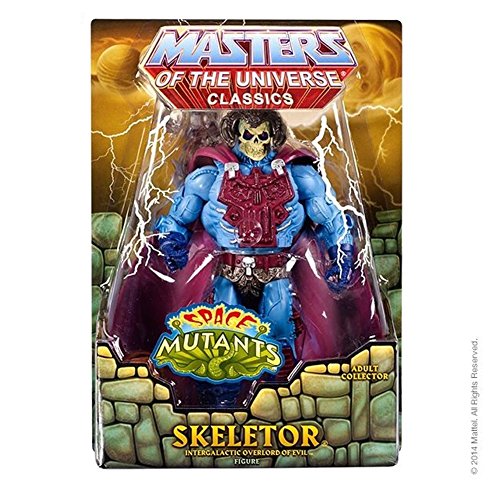 The very tail end of the 1980s would bring us the Jetlag Productions revival of the MOTU franchise, which introduced the war between Galactic Guardians and Space Mutants. But what justification do we even need for Space Mutant Skeletor? He’s looking pretty hardy for a guy with a bone head, isn’t he? 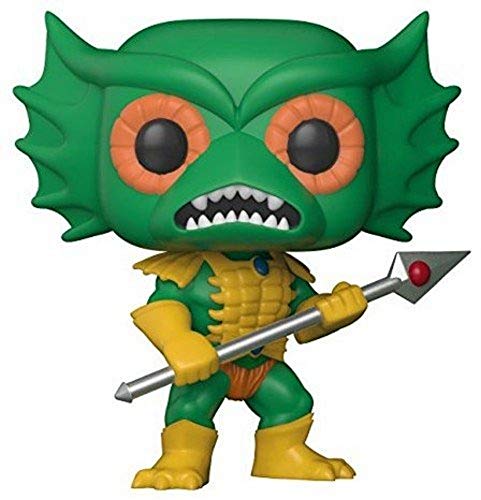 Funko Pops of course exist for every franchise in the known universe, but we figured we’d give you a break from them for most of a post while we showed you something else. They exist for the whole cast, naturally, but this little Mer-Man dude is just too fierce to pass up. As one of Skeletor’s henchmen right alongside Beast-Man, he’s another evocative character from the classic run of the series.

Here's Some Fun Toys For Adults Who Are Children At Heart