Thanos, the big bad titan of the Marvel Universe, has stolen the show in both Infinity War and Endgame. But, Iron Man is our truly favorite character and we couldn’t possibly love him anymore than we do right now after he saved us all in Endgame. **tries to hold back tears** 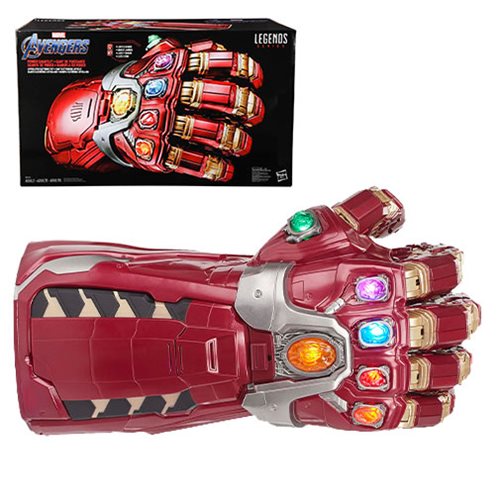 No spoilers - we hope! The Marvel Legends Gear Avengers Endgame Gauntlet Prop Replica is a massive fist with gems designed to change the destiny of life in the universe. Can its right-handed form change the sinister snapping of Thanos? Will its articulated fingers size fit all? Might this be the...

Harness the power of Thanos! Extremely detailed 1:1.5 scale Infinity Gauntlet replica. Inspired by Marvel's Avengers: Infinity War Lights up and dims at the rhythm of breathing! The meteor base makes this a centerpiece for your collection. Beast Kingdom joins Marvel to offer this Avengers:...

Take control of the universe! 19 1/2-inch long Infinity Gauntlet with intricate detailing and 6 light-up Infinity Stones. Inspired by the Avengers: Infinity War movie. Features pulsating light effects, movie-inspired sounds, and articulated fingers! Thanos will be sooo mad! You don't have to be...

While Iron Man may not be the first avenger, he’s the first Avenger and the founder of the Marvel Cinematic Universe. His personality traits and mannerisms make him the type of likable character people of all ages can truly enjoy. Robert Downey Jr was born to play Tony Stark. And we’ll remember him as part of our childhoods for years to come, even if we were 24 when Iron man (2008) hit theaters. The point is, MCU movies have brought the type of excitement out of many of us that we haven’t experienced since waking up as a child on Christmas morning, and I’m thankful for that.

While it is true that the mad titan was already a major part of the Marvel Universe, the newest movie pushes him to the hierarchy of great movie villains (Is he bigger than Darth Vader?). Show your love for the Marvel Cinematic Universe, Avengers Endgame, and IRON MAN with these full sized replica gauntlets below.

The Infinity Gauntlet, one of the most powerful weapons in the known universe, allows its user to harness the power of all of the six infinity stones. Each of the stones controls an aspect of the universe and can never be held by a mere mortal; space, time, reality, power, mind, and soul tones all keep the balance in the known Universe.

Being the enraged and mad titan that he is, Thanos is capable of holding all of the stones in the gauntlet. Thanos has used the gauntlet on various occasions and one of his greatest feats with the gauntlet was when he managed to kill half of the universe in one snap.

The gauntlet present in the marvel movies is incredibly accurate, as it perfectly captures the design and the look of the comics. Regardless of the infinite power that the infinity gauntlet holds, there are a multitude of different characters that have managed to hold onto the infinity gauntlet without disintegrating into dust.

Characters like Spiderman, Iron-man, Mr. Fantastic, Silver Surfer, and strange enough Santa Claus as well have all held the gauntlet with near to no consequence.

Check out this unboxing video below to see just how MASSIVE this thing this.

Here The Endgame Action Figures We Can't Live Without